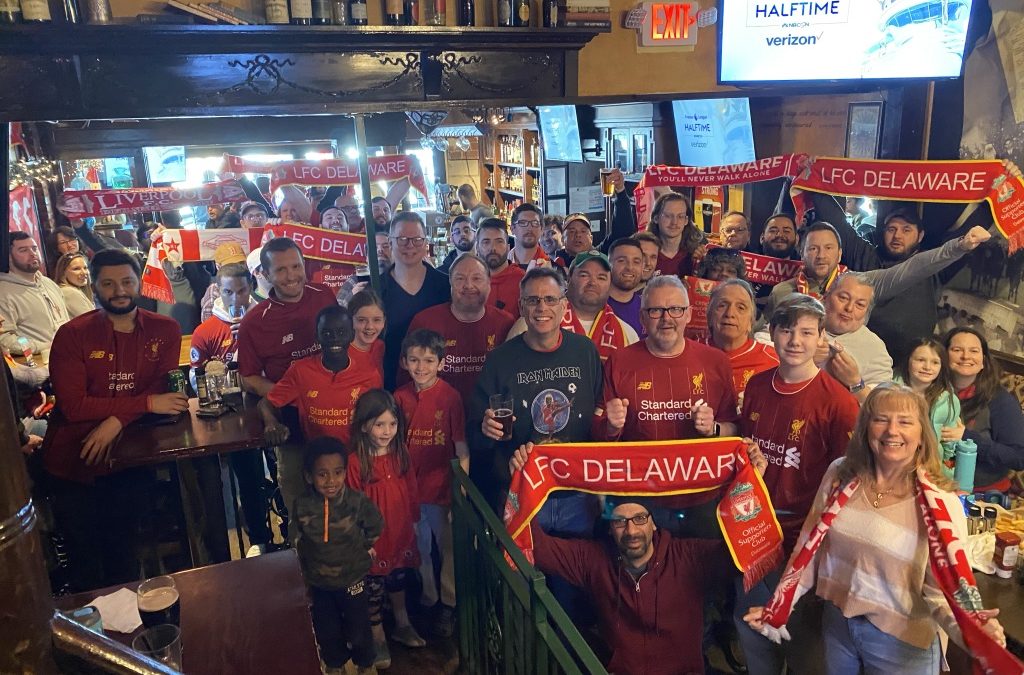 In April of 2020, we chatted with Fanscorner, who covered the LFC quarantine story in this article…

Liverpool Lockdown: How the Delaware supporter club is coping during the coronavirus

Rarely has family felt more important. This is true in a literal, practical sense – many of us are confined to a household alongside family members, making good relations a necessity in order to survive the coming weeks and months. There is also a wider sense of family, however, and it is one that highlights the important role football can play in society even when there is no sport.

This is illustrated particularly clearly in Delaware, USA. One of more than 50 Official Liverpool Supporter Clubs (OLSCs) in America, the east-coast group has taken a number of steps to maintain and grow a sense of community even when physical meet-ups are not possible. Not least amongst the new activities is the establishment of the LFC Delaware podcast: they were kind enough to invite me on to the latest episode, where we discussed how the group is meeting the challenges posed by coronavirus.

Paul Gaskell, who chaired the podcast, was quick to mention their new Reach out to a Red campaign. This initiative, which it is hoped could grow beyond the OLSC and into the wider Liverpool fanbase, is designed to encourage people to get in touch with a fellow supporter who they may not have heard from recently. It is crucial in these times to stay in contact with people, both as a means of offering practical support where possible and as a way of combatting issues such as loneliness. It can be hard to know how best to go about this, but Reach out to a Red provides a simple pretext for checking in with fellow fans.

This is already enjoying some success in Delaware itself. Gaskell noted: “We’ve already got a few people to come out to our events who may not otherwise have done so [thanks to] the campaign.” Of course, these events are not physical get-togethers: in lieu of the usual trips to the pub to watch the games, the OLSC are hosting opportunities to meet virtually as many as three times a week. The regular calls – including a happy hour on Fridays – offer an informal place to share news as well as memories of watching Liverpool, with an accompanying Facebook group serving as a forum for further discussion.

If anything, the supporter club has been brought closer together by the lockdown. Timmy Que raised the point on the podcast, saying: “I have this hope that these times of connecting just strictly on a social level will actually strengthen the core of the club a bit more, and be something going forward where instead of just [meeting on matchdays], maybe on a night where there is no match we’ll get together and just talk to each other as people.” Both at this localised level and worldwide, there is a vibrant community of Liverpool fans – as podcast regular Sean O’Neill said, if coronavirus can bring that community closer together then it may be that some good will come out of it all.

That is not to say that the Delaware setup in more normal times is not a lively one. Indeed, Que was at pains to point out that the club has a thriving drinking culture – it may have missed the cut in the previous piece on the OLSCs, but it is nonetheless alive and well! Shots after every goal was a particularly dangerous tradition in the early Klopp days, with the 5-4 win over Norwich instantly springing to mind, while a recently-developed Bushmills Whiskey ritual sounds similarly intense.

It is great to see fan groups such as this one replicating and building upon such camaraderie, albeit in new ways, during the lockdown. It is also encouraging that some of the official response from the club has been so positive. There is a temptation to focus on the much-publicised misstep regarding furloughing of staff, but behind the scenes some genuinely good work has taken place: the podcast touched upon the club-organised calls that have been taking place between OLSCs worldwide. Hopefully, through the combined efforts of the club and the fans, we can make sure that every Red is reached during a time that is difficult for so many.