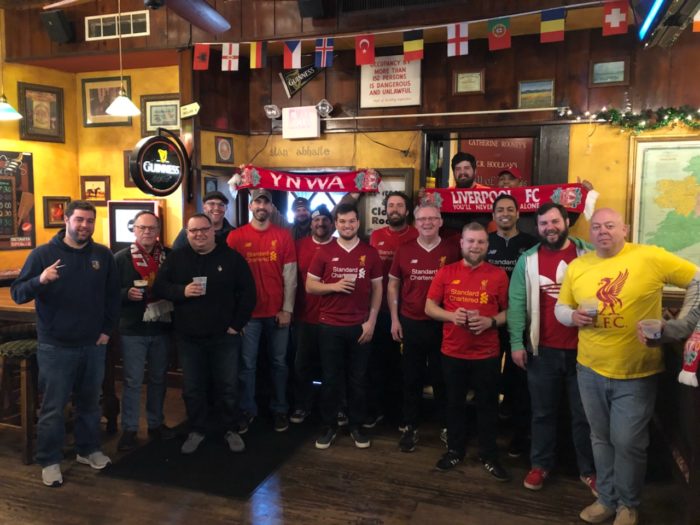 Technical.ly Delaware was kind enough to feature the Delaware LFC Supporter’s Club in an article back in April of 2018. Here’s what they had to say…

The love of soccer unites people. How do you unite with fans when your team is based across the Atlantic?

Catherine Rooney’s in Trolley Square is big on Premier League Football (that’s soccer, for uninitiated Americans), opening its doors as early as 7:30 a.m. some days so fans can gather to watch games live.

And when Liverpool FC plays, it’s an event. Over the past few years, Catherine Rooney’s has become the home of the almost-official Delaware LFC Supporter’s Club. With nearly 100 members, it’s just shy of becoming an Official Supporter Club recognized by the LFC like clubs in Philly and Baltimore.

Why do folks around here love Liverpool?

“Some people see parallels between Philly and Liverpool,” said Paul Gaskell, one of the club’s organizers. “Others are attracted to Liverpool FC’s amazing history and Liverpool’s reputation as a place with strong Irish, Welsh and Scottish connections as a catalyst — think McCartney and Lennon, two Beatles with the most Irish names.”

For Gaskell, a Liverpool native and founder of the Wilmington-based On N Up Coaching, the LFC Supporter’s Club is a way to meaningfully connect. “I lived here for many years without the joy of watching games with fellow fans,” he said. “Finding this group has been an awesome experience for me personally.”

The club has grown rapidly. “Four years ago I watched a really important game for Liverpool with four others at Catherine Rooney’s on a Monday afternoon,” he said. “Last month, we watched an equally important Champions League game with about 30 supporters on a Wednesday afternoon. I’m sure we haven’t tapped into our full potential yet, but the growth has been amazing.”

Liverpool, by the way, is having a very good year. If they win their next two games on April 24 and May 2, they’ll be in the final of the European Champions League, sort of like the Super Bowl of premier club soccer.

Anyone can come out to Premier League viewings at Catherine Rooney’s. For times and more about the Delaware LFC Supporter’s Club, check out their Facebook group.